Despite having no background in surf lifesaving, Ruth Kelly and her husband Greg Booker decided to join Manly Lifesaving Club after moving to Manly and renting a home that overlooked the famous beach. 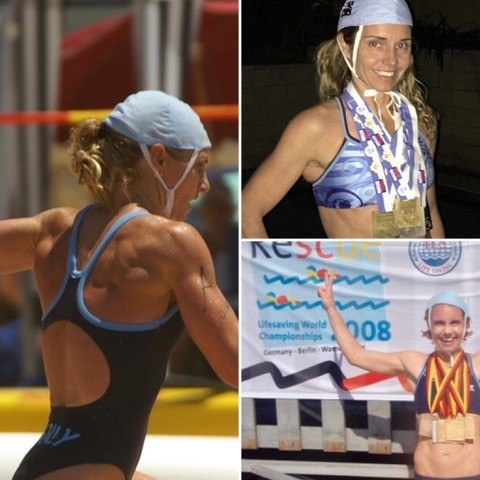 During the mid-1990s the pair were awarded their bronze medallions and since then have immersed themselves in almost everything the lifesaving movement has to offer.

Ruth served as Manly’s first ever female Club Captain all the while excelling in the famous sky-blue cap during competition.

She recalls how it all came about by chance.

“After moving to Manly we’d look out and see these young kids that were able to swim and board paddle and have a great time,” she says.

“We just kind of went, ‘that’s something that we’d love to be involved in’.

“We just thought it would be a great avenue to meet people, but also learn a few different skills along the way as well.

“We wanted to learn how to ride a board and a surf ski and learn the craft at a much later age than a nipper let’s say.”

At the time, Manly LSC’s membership numbers were nowhere near where they stand today, and Ruth recalls how there was still a distinct lack of female representation at all levels.

This saw Ruth and Greg quickly establish themselves as familiar faces on patrol before their enthusiastic approach saw them take up positions as bronze trainers.

“At the time there was probably not a lot of members doing patrols and given our location, we could always jump down to help out,” Ruth explains.

“We built a really lovely relationship with Manly Council lifeguards and learned a huge amount about being able to scan the beach for people that were in trouble.

“Through that we wanted to pass that knowledge on and so moved into the training aspect.”

Ruth and Greg oversaw the club’s education program for several years and many of the club’s members today have the two of them to thank for teaching them their SRC or bronze medallion.

For Ruth, there was no shortage of moments that made her feel like it was all worth it.

“It was a lovely way to meet new members coming in,” she reflects.

“Also it was a great community feel, not only working with the young kids that were coming through their SRC but also, you know, older people doing their bronze.

“We had the pleasure of training Frank and Barry to be lifesavers. At the time they were in their late 70s.

“They always walked the beach in the morning and were very astute to what a rip was, but they just wanted to say to their grandkids and great-grandkids that they had become a lifesaver.”

After putting her hand up to become Club Captain, an organisational position overseeing Manly’s patrolling core, Ruth was proud to discover that she was the first women in the organisation’s history to serve in the role.

“Within the broad 100-year history of the club that was very cool to find out,” she says.

“My husband followed a few years after that, so I felt like I was a little trailblazer on that one.

“To be fair to him, he went into the chief instructor role for a while and we were always associated together.”

One experience of Ruth’s tells of the ongoing resistance to female involvement that has been slowly but surely broken down over time.

“I’m quite a small frame and I was talking to someone about wanting to paddle a surf ski,” she recalls.

“They just looked me up and down and said, ‘well, if you can’t carry it. You can’t paddle it.’

“That made me more determined and I never looked for any special treatment being a female, but I really wanted to make sure that there was inclusion of everyone.”

Ruth well and truly went on to prove all of the doubters wrong as she finished in the top 20 of the inaugural women’s Coolangatta Gold surf endurance Ironman event.

She also introduced the multi-disciplined Champions Lifesaver and Patrol Competition events to the club for the first time, where she took home three state titles in the early 2000s.

In the masters 30-34 years category, Ruth once held the Branch, State, Aussie and World titles for the 2km beach run event.

She also recalls how “it was a great thrill” teaming up with Naomi Flood, Candice Falzon-Warner and Devon Halligan to win the 2009 opens women team of the Coolangatta Gold.

Ruth is especially proud of Manly’s homegrown female role models who went on to excel on the Ironwoman circuit and beyond, which she believes “really helped ignite the idea that women could do anything.”

One persisting point of difference commonly highlighted by the female members of Manly LSC is the toilet facilities.

“We have what we called ‘the broom closet’, and the men have always had this amazing space,” Ruth says with a chuckle.

“We’ve always joked that we’d get more than 50% of women members of the club and that they would eventually have to swap around the change rooms!”

Ruth’s story is one of the many Manly LSC will share in the upcoming weeks so be sure to keep your eyes peeled on the club’s website and social media channels.