40 YEARS OF WOMEN IN LIFESAVING | Mel and Georgina Pelly 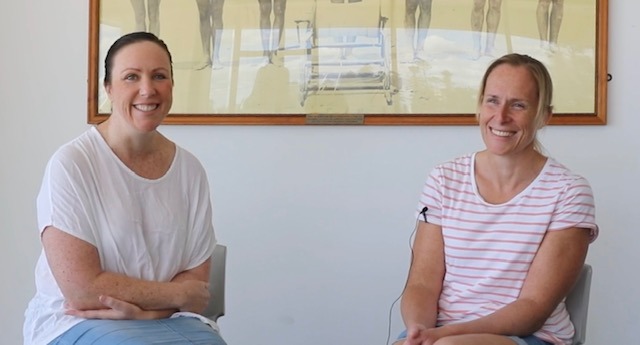 Since joining Manly LSC in the early 2000s, the Pelly sisters have immersed themselves in just about everything the lifesaving movement has to offer.

After moving to Manly, the younger of the two Mel joined the club in 1999 before Georgina followed suit two years later.

“We’d been coming down to the beach a lot as kids and in around 2000 I moved to Manly and thought it was a good opportunity to get involved with the surf club and see what it was all about,” Mel recalls.

“I did as many courses as I could straight away and then we were straight into competition.”

Within a matter of years, the two not only completed a number of certificates but also became qualified trainers.

Like Ruth Kelly and Greg Booker before them, as new members of the club they found it to be an extremely rewarding experience.

“Taking a lot of groups through Bronze Medallion training was a great way to meet new people and add some value.

“Looking back now, a lot of kids who I trained in U14s for their bronze that are now starting to have kids of their own.”

While the sisters spent plenty of time in the clubhouse, they also spent countless hours training out on the water.

After joining the club a few years earlier, Kelly had introduced the ‘lifesaving events’ of Patrol Competition and Champion Lifesaver.

As multi-disciplined competitions with physical and theoretical components, the Pelly’s found the perfect way of combining their expertise off the beach with their love for physical training on its shores.

The two would go on to participate in a successful Patrol Competition team that won seven straight state titles.

By 2011, Mel had won three Australian Gold medals, three silver and a bronze as well as 17 state gold medals.

Looking back, she cites a couple of key mentors to thank for it all.

“Greg Booker and Ruth Kelly were the main people we had contact with when we started at this club and they were key mentoring figures and ‘role models’ for sure,” Mel reflects.

As they grew older and the sisters began to have families of their own, priorities changed and Masters competitions became the perfect way to prolong their involvement.

“Once we hit thirty, we couldn’t wait to join the fun of masters and start competing there,” Georgina says.

“I had my first child at 34 and he was on the beach with me doing patrols – when he was six months old I did my first lifesaving competition with him as a baby. He sat on the beach wearing a Manly hat and stood on the podium with me.”

“Particularly in Masters, as time goes on you get to know your competitors them better and better,” Mel explains.

“You turn up each year, haven’t seen each other for six months but nothing has changed and there’s a great bunch of female athletes on the Northern Beaches as well.“We always have a great time competing, just spending time with each other and having lots of laugh along the way,” Georgina adds.

“I think that is the nice thing about lifesaving – you see the generations, and Mel and I are looking forward to being 65 and doing the beach sprint – even if we have to crawl it!”

Since then, numbers have exponentially grown into a strong crew who can be seen training most mornings.

“I think the surf club always involves a bit of a word of mouth of encouragement that gets people into it and I think that is the great thing with the Masters girls today,” Mel says.

“When Georgina joined masters there were probably only 3 or 4 girls racing, but today we have 15 or 16 people who turn up to competitions and a whole bunch of girls down here training with the Masters crew.”

Just as she did throughout her 20s, Mel excelled competitively at Masters level – taking home the Coolangatta Gold on two occasions.

She also references the famous endurance race as an example of the progress that has been made in recent times surrounding gender equality in lifesaving.

“In 2006/2007, only the men could do a long course and the females could do the short course: there was no choice,” Pelly recalls.

“There was about half the prize money for the females as the guys so a lot of the elite females after a couple of years of that time started campaigning.

“It took them a few years but they finally let the elite girls do the long course and I believe they now have the same prize money as well.”

While many women who were present in surf clubs during the late 20th century recall an exclusive masculine culture, Georgina has not sensed any resistance during her time with Manly.

“I think like society in general, women are starting to have a greater presence and there is an evolution that’s taking place and will continue to.

“Socially and in terms of doing courses and contributing to the club there are zero barriers.

“Even setting up for a carnival where you have to lift heavy equipment, there’s never someone saying ‘men only for this job, women only for that job.’

“It’s all in and you do what you are capable of doing and what you feel like doing. Even with the kids, there are no barriers.”

These days, while most of the Pelly’s energy is committed to raising their children, they still involve themselves with the club at every opportunity.

Georgina mentions how Manly is yet to see a female president and jokes that Mel “might just be crazy enough to do it one day.”

Looking back on the contributions of the two, as well as likes of Enid Taylor, Ruth Kelly, Debbie Watson and Denise Elder (all previously profiled by Manly LSC), Greg Booker’s passage from the club’s 2010/2011 annual report provides a fitting conclusion:

“We are lucky to live in an amazing era for female lifesaving in Australia. In time, history will reflect on the contributions from the Manly club; Mel and Georgina Pelly, Naomi Flood, Sophie Tyner, Ruth Kelly and many others, as laying the foundation for today’s female stars and for the emergence of the female lifesaver as a stalwart of all clubs in the 21st century.”